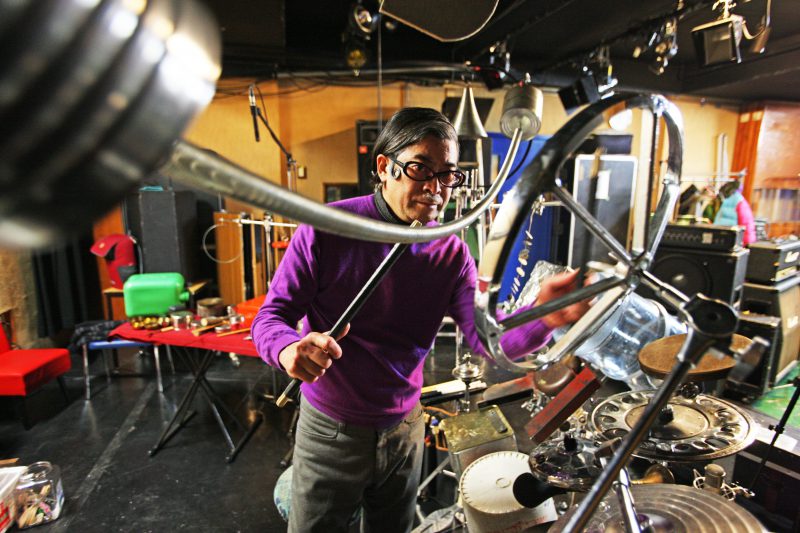 “The artist breathe life into JUNK”

Born and raised in Tokyo. The entered the music business as an apprentice as an assistant of a world famous drummer Hiro Tsunoda in late 70’s. 1980,he joined “Hiro and Jap’s Gap’s” which was organized by Hiro Tsunoda and started his career as a professional percussionist / drummer. After breaking up of “Jap’s Gap’s”, he turned to freelance basis activity. Up to present date, he has been engaged various activities including live supporting, tours, recording and collaborations with many musicians such as MIho Nakagawa, Miki Imai, Kirinji, Ken Hirai, and so on.

Beyond that, of special note about Tomo Yamaguchi is his peculiar side as a Junk Drum Performer.He is well-known and the only percussioninst who plays original percussion instruments made of obsolete materials. In 1995 he was engaged in the theater act “The Night of the Galaxy Railroad” as a sound creator. With this experience as a start, he began to create his original percussions made by obsolete materials.At the same time he began to perform as Junk Drum Performer at live , concert , workshop across Japan. Currentry, his original and unique talent was widely recognized, he appeared on the TV program “DO RE MI NO TV” which nationally broadcasted by NHK in 2003. With this case, he gained popularity regardless of age. He is still in generating his own world of rhythm created by obsolete materials.